My name is Roy,

I was born in the summer of 1991. I live in Limburg, the Netherlands. 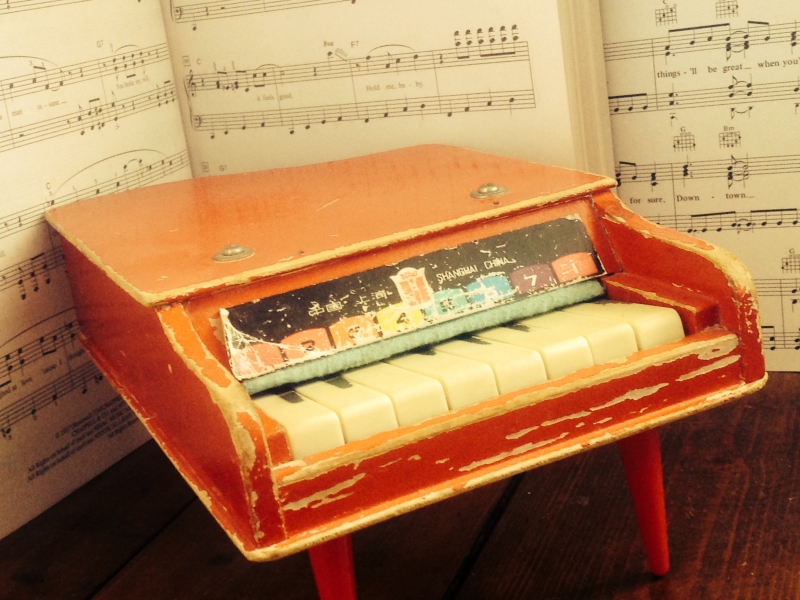 My first piano, a present from my grandmother.

The first musical experience I remember is: “Sitting in the back of the car, and trying to sing along to the tapes that were playing, together with my brother”. We listened to songs such as “Donna the Prima Donna” (by the Jets), “The Diary” (by the Speedos) and “Put the blame on me” (by Matchbox). Pretty Little Lovesong and Wishfull Thinking (by Hayden Thompson) Of course our English wasn’t very good at 3 or 4 years old (and being Dutch) so we kinda made up our own lyrics on the go while singing along with everything.

Around this age, I must’ve been 4 years old, my grandmother gave me my first piano. A very small, fire red toy-piano. Therefore I believe she got it all started. At the age of 6 I started the piano lessons. I was too young and inexperienced to compete with the group, so I had the first couple of lessons at Angelique, my piano teacher’s house.

About 2 years after I discovered the piano, my brother Mitch discovered the guitar. It wouldn’t last long before we were performing with our first great successes: “Mary had a little lamb” amongst others.

As soon as I went to Highschool a very good friend told me about the School-orchestra, wihch I’ve been playing with throughout my Highschool days without ever reading a single note of sheetmusic. It was here that I first really learned to “listed, analyse and then act upon” a method I personally still prefer over reading sheet music. (It not only allows me to learn the music faster and remember it better, but also forces me to think logically and analyse my every move). With the school orchestra we traveled to multiple big gigs in the Netherlands as well as in “Hungary” “Germany” and Italy”. Afterwards I was also invited to join the Dutch “Royal Airforce Orchestra” twice as a pianist and met our Dutch queen Maxima. Naturally this was an absolute honour!

About a year after I finished Highschool I met my good friend “Guus Hennen” who is a very talented musician and also the creator of this website. He has proved to be a big personal and musical influence on me, and we still work together on a regular basis. Playing certain events as a Duo, and working for the “Van Der Valk” hotels on a monthly basis. 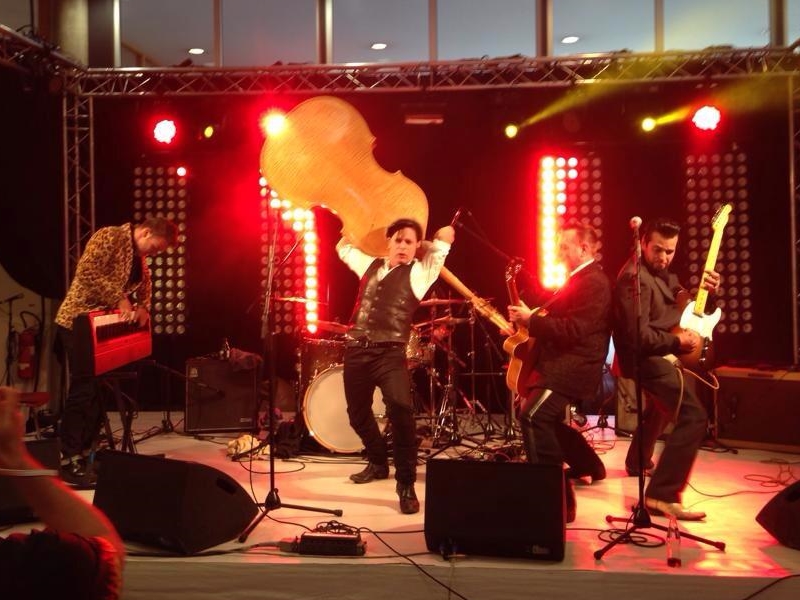 On stage with “The Firebird Trio”

In the winter 2012/2013 the rehearsals started for the first Rock ‘n Roll band that wanted me as a pianist. The band was soon to be named “Laverne and the Rhythm Kings”. It was a part of a slightly bigger project called “The All Starr Rock ‘n Roll Revue”, a group of musicians who would perform in a couple of different line-ups. During this period I first started to develop my on-stage act by learning from whoever I worked with.

Among others “CC Jerome” (NL) and “The Firebird Trio” from Australia. Beside the great gigs we had on tour, this gave me the opportunity to record my first two self penned tracks with this band. I am not ashamed to admit that I’m very gratefull for this opportunity. The two tracks recorded at this session are yet to be released due to a project that is still running.

One thing lead to an other, through my good friends Harald and Dianne, I met the guys of Porky’s hot rockin’ at the “Wildest Cats in Town” weekender in Pakefield (GB). The collaboration with Porky’s Hot Rockin’ has proved to be very productive. I was a proud member of the band, and learned new things every day, and I sure enjoyed every single second. In Great Britain I have worked with “Mark Harman” (Restless), “Rock House”, “Some Like It Hot” and “Gina Haley” (Bill Haley’s daughter). I also got to work with some of my absolute heroes: “Graham Fenton” (from Matchbox), “The Del-Satins” (who sang with “Dion” on the original versions of “The Wanderer”, “Runaround Sue” “Donna the Prima Donna”) “Hayden Thompson”, (who had a young Jerry Lee Lewis play piano for him on “Love My Baby”) W.S. “Fluke” Holland, (who was Johnny Cash’s drummer for 40 odd years, and plays drums on the original versions of “Blue Suede Shoes” & “Matchbox” with Carl Perkins) and “Art Adams” (“Dancing Doll” “She Don’t Live Here No More” “Indian Joe” and more). Later I got a chance to join the Art Adams band in the USA, and play gigs in Indiapolis, Louisville and Nashville twice! I’m really gratefull for those guys letting me on board and allowing me to learn the craft in the USA where all the music came from!

I want to thank everybody who’s right here beside me, helping me to do what I do. It would not be possible to get this far without all of  you! The road is clear, the sun is shining, and we’re moving forward. Wherever we’re going, I hope to see you there!